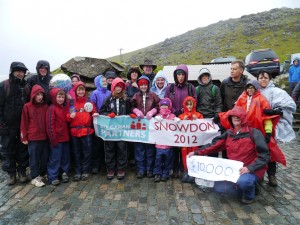 Getting ready for the big climb!

We arrived at Pen y Pass soon after 8.00am and were delighted to secure the last five spaces in the hugely popular car-park, consoling ourselves with the thought that the exorbitant £10 fee would contribute in some useful way to the upkeep of the wonderful Snowdonia National Park.

With 36 trekkers, 16 of them children aged from as young as six, we needed to be well-organised. We chose the long days and ‘warm weather’ of June, had all the right gear, took spare food for the children, and started away early.    Above all we checked the weather forecast.

After several days of heavy rain we were delighted that the forecast predicted dry weather from around 10.00am, so we togged up and set off at 9.30 am in high hopes of balmy conditions  ………  but actually in heavy rain.

The Miners Path took us past the ruined Victorian Britannia Copper Mine with its ruinous buildings and sturdy iron rock-crushers which someone had tried unsuccessfully to smash up with a sledge-hammer for scrap.  Did the Victorians use JCB’s to dig out the ore? …there was one parked nearby.  Around the corner we found the real reason for the excavator as giant rocks in ‘Helibags’ had been dumped on the path ready for improvement works. The helicopter delivery operation must have made an impressive sight .

We trudged on in the continuous rain, amazed at the sheer numbers of people on the path, and at times we had to queue to pass narrow sections. There were lots of Japanese and Chinese walkers some looking rather grim-faced.  I was therefore surprised to spot a happy Chinese-looking family so I congratulated them on getting half way up the mountain in the rain, and asked them where they came from, secretly unsure whether it would be China or Japan. ‘Manchester’ they said, which may have accounted for their apparent contentment in the rain!  Interestingly I don’t recall seeing any Welsh walkers, except the very fit-looking Llanberis Mountain Rescue Team attending a hypothermic walker. 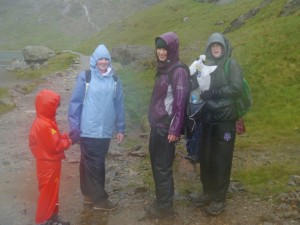 On the way up

One of the advantages of walking in rain (actually the only one) is that there are lots of huge, picturesque waterfalls.  The ground is rocky and the rain runs off quickly, so the best time to see big waterfalls is immediately after, or during, heavy rain. Walking up waterfalls actually on the path added to our pleasure, but not comfort. 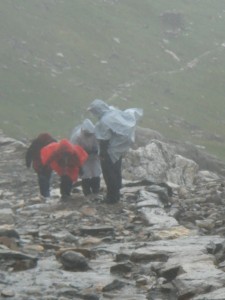 The Oprenovs enjoying the British summer as they ascend Mt Snowdon

At about 2,000 ft the temperature was cooling and one of our six-year-olds started to feel cold. Choccy bars had ceased to have the usual effect and the rain showed no sign of stopping, so she decided to turn back.  However, shortly afterwards, perhaps realising that she was in fact in charge, she decided she wanted to carry on to the top, and by one o’clock she was there, cold, wet and tired but with a great sense of achievement.      How wonderful to feel that at the age of six! 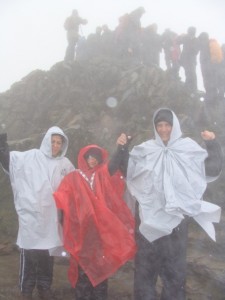 A bit wet but happy!

The wind was now driving the rain horizontally and conditions were very unpleasant.  The summit was the archetypal ‘wash-out’ where there were just two priorities:  to get a photograph before the camera succumbed to the rain, and to get into the café before we suffered the same fate.

The café was full of steamy, dripping, jostling, good-natured trekkers, eating their own crushed, soggy sandwiches under a large sign decreeing ‘Only food purchased on the premises may be consumed in the restaurant’.

One of our young trekkers was celebrating his 10th birthday, so miraculously his mum produced not one but TWO birthday cakes from her ruck-sack, stuck in rows of candles, and failed to light them with soggy matches.  Fortunately reserve matches were at hand, and there was a hearty round of ‘Happy Birthday’ as he blew out the candles and we ate indecently large slices of very welcome cake.

The next problem to address was how to get tired kids (and tired adults) down the mountain. The Snowdon Mountain Railway trains were fully booked, so we buttoned up and took to the swirling rain once again. Actually, the journey down was easy, because it was down hill, we were looking forward to the promised balmy sunny lowlands, and we were going home. The children developed new resources of energy without choccy bars, and at 3.00 pm we emerged below cloud-base and the rain almost stopped.  At 4.00 pm the sun broke through briefly, six hours late, for the final stretch back to the car-park and much rejoicing.

So, we had conquered the mountain on a stormy day when 5 inches of rain in 24 hours caused severe flooding a few miles to the south.  The children had achieved more than they thought they could, we had established new friendships, and reinforced old ones.  We had all ACHIEVED  and had FUN.

Most importantly, we had raised OVER £12,000 for a project close to our hearts, so THANK YOU to:

–James Caldwell for planning the event and organising us,

–the Met Office for motivating us with a wildly optimistic forecast,

–all our trekkers, young and older, you were BRILLIANT. (Yes, all the choccy bars have now GONE!)

–and of course ALL OUR MANY SPONSORS, four of whom gave twice!       If you have not already paid   the sponsorship you promised, please do so now. Thanks.

ITS NOT TOO LATE TO SEND A DONATION!