Our studies in the last month have gone very well. We keep meeting and having our literacy classes every week. 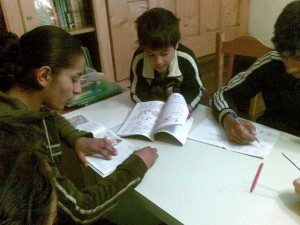 Few of the children are now kept in home to take care of the small ones and help in the house chores, which is something that happens as summer approaches. We regret that very much because the children can`t study and miss a lot out of it. But we hope that this will be temporary as it has happened before. Actually this is one of the major problems that we have had, working with many of the children and their families, as we have been trying to explain to parent how important school and education is for the future of their children. And it is exactly that lack of support from their parents, that is the reason why such children don`t start school or drop out of it at an early age. The result is a huge percentage of illiterate children and major lack of employment. This is a serious issue among the Roma ethnical group. 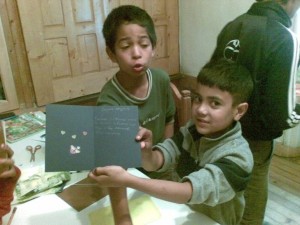 In the last month there were also tree sick children from our group. One of our boys had chicken pox and after that his sister got seriously sick, so she was then kept for a few weeks in the hospital. Thank God she is out now, making a good  recovery and she is feeling well.

Also one of the girls, Ginka has been to the doctor because she had heart problems and pain. But she had been refused to be cared for, in spite of the fact that she has all the rights to, because the doctor said she was very young. But as we know this is no excuse not to care of a sick young woman, so we have been encouraging her to fight for her rights and insist on being cared for. The problem is that her mother also doesn`t pay attention to her and Ginka has lots of behavioral issues.

On 1st June, 2010, being the ‘day of the child’, we had a holiday dedicated to the children. We decided to have a special day and show the children that they are precious to us. We also wanted them to feel as real children somebody cared enough to spent time with playing and having fun. We did a lot of cutting, coloring and gluing together. The children appreciated this and enjoyed doing even simple cards with the desire to make a small exhibition in the church and show their works. We decided to show the people from the church the cards we made on this special day. 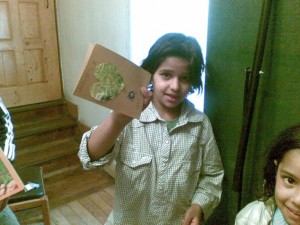 The children also enjoyed the balloons and the little gift bags with verses from the Bible. And their excitement over all was so big that they hardly waited for the lesson to finish so we could have fun time. Even one of the hardest boys to work with Ilian,  who spends most of his time wondering around the streets, wrote something special on his card for Plamy and gave it to me as a present. It was amazing to feel the appreciation these children had to the fact that we had shown a personal interest in them as children on this day. It was a very precious moment to remember. And at the end of our meeting we had snacks, cakes and laughter to remember the day with.

These children need to feel that they are children because most of the time they are not treated as ones. Few weeks ago our teacher Dora had to go and buy some notebooks for the literacy class project and one of the girls Rosi, who is 10 years old, went with her. On their way to the bookstore Dora says, Rosi was very interested to look at the windows of children`s stores full with toys and books with pictures. So Dora pointed to Rori some pictures of Cinderella, Snow-White and Winnie-the-Pooh in one of the stores but realized that she did not know who they were at all. On their way back Dora was very busy telling this 10 years old girl the stories which every child is told at much earlier age. And later on in the week, by asking all the children, we realized that most of them have not heard of these and other stories for children just because there was nobody to tell them. Thus, some story telling is in order for the near future in the classes alongside the lessons in reading and writing.

Sadly, many of the Roma children have to grow up taking care of the younger ones in their families and do not know what it is to be children themselves.