A child called Kinche from one of the orphanages in Berkovitsa disappeared a few months ago.  She was a Roma girl who had 11 brothers and sisters and was abandoned by her parents very early in life.

It was known she had lived with an older man somewhere in northern Bulgaria, but the school authorities and her parents did little to find her. Although nothing is certain, Teddi and Didi Oprenov, leaders of the Good Samaritan Foundation, were later told that the much older man who she was ‘living with’ forced her to be a prostitute on the main road to Lom, a city on the Danube in north western Bulgaria. 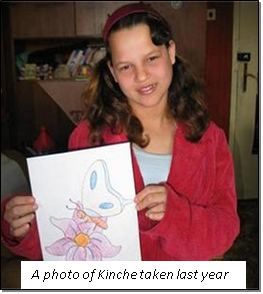 Teddi says, ‘After she tried to run away, he beat her, tied her up and kept her in a cellar for weeks. Then no one knows why, she was brutally beaten almost to death, both her wrists were broken, as were several fingers, and there were other injuries.  With severe head injuries she was thrown onto the street next to a bus stop in the town of Lom. There she was found and transported to the Pirigov emergency unit in Sofia. At that time, rather too late, we were made aware of her condition. We and many members of our church went daily to the unit to help with anything that we could. For two weeks constant prayer was organized. Kinche went through 5 brain operations, totally unable to communicate during most of that time, but at the end she went into a coma and passed away on the day after Easter. Kinche’s mother collected her body from the hospital in Sofia, and many of us attended her funeral in Montana,100 km north of Sofia.’

Teddi continues:  ‘There is a slow police investigation now. The latest news is that the man is a well known criminal who was only brought into custody after the death of Kinche.  This tragedy has once again brought the issue of child abuse sharply into our minds, and it is clear that in cases like this one, everyone failed that little girl – parents, orphanage authorities, society in general.  Our church was devastated at the loss of this young life, a person we knew and loved.’

Geoff Wallis:  ‘This makes me weep. I am determined to see this new Centre finished so that we can offer a safer future to the ‘Kinches’ still in Berkovitsa, and many other orphanages’.