It has been a busy summer for Sofia Baptist Church as their new Social, Medical and Training Centre gets into full use.

In June the Literacy Class held its end of term presentations: 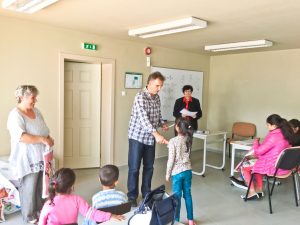 Then, no rest for the teachers as they ran very successful camps in the summer holidays for families, children and teens, almost half of whom were abandoned youngsters from children’s homes or orphanages.

Everyone had fun, made new friends and received spiritual input which for some has made a life-changing difference.

Feeding homeless people in a park near the Centre continues 6 days a week and an increasing number come to the Centre for Sunday and week-day meetings. This brings risks, but so far problems have been limited to the theft of all the soap from the toilets !

The Centre’s volunteers have been helping in a local refugee camp called “Voenna Rampa” which contains many Iranians and Syrians.

One helper is a former criminal from Iran named Ali Dini who spent 14 years in Bulgarian prisons before becoming a committed Christian. A few years later he was released for good behaviour and committed himself to support his people in Bulgaria. In August Ali started weekly afternoon meetings for Iranians and Syrians, where 25 guests enjoyed good company, hot food and were offered humanitarian help.

Ali is older than most of the refugees so they regard him as a father-figure. (Photo below).  He translates between Bulgarian and Farsi in an atmosphere that is friendly and evangelistic.  The Centre’s hot showers are popular, and Bible study in Farsi is another first for the Centre ! 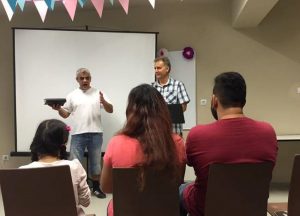 Work amongst refugees has been going on for several years and is developing as the need increases.  Didi Oprenova has been closely in touch with families from Iran, Syria, Egypt etc in Sofia’s refugee camps. Many people just pass through on their way to western Europe, but they are helped however possible during their stay in the camps. Those that stay longer need longer term help, and the Church would like to do more, after all, this is what the Centre set up for, but cash to cover food, heating, and other running costs is limited as the Centre is not yet self-supporting financially.

Dear supporter, please consider donating towards supporting refugees in this way, however much or little, via this website using our fund raising page or Geoff Wallis whose address details can be found at our contact page.  Monthly donations are particularly helpful, for which I can provide a simple one-page form.  Remember, the Trust can claim an extra 25% from the Government through our Gift Aid scheme at no extra cost to you!

In August American outreach workers Tom & Terry Myers signed a lease for one of the street-level shops for their proposed ‘Cafeology’ café and outreach centre. 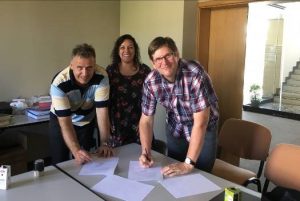 The old building 100m up the road from the Centre, has been leased by a Korean Church who are re-decorating it at their own expense, and plan to move in during October.

The smart office suites on levels 5 & 6 of the Centre are being marketed by agents, and a number of companies have expressed interest.

For more details see http://www.imoti.net/naem-ofis-sofia-centar–anno2840445.html    If the link doesn’t work, copy and paste it into a Google search, and click on ‘Translate’.

Meanwhile the Sunday school, the literacy class, The Bulgarian Theological Institute, and other initiatives are starting this month, and Sofia Baptist Church’s office has moved into the Centre from the old building.

Thank you each for your continued support.