Vaska started walking to the church as soon as she was able to wander on her own, at about the age of three. No-one cared much where or how far she went, being one of 7 children, all with different fathers, living in a temporary hovel near the Church. 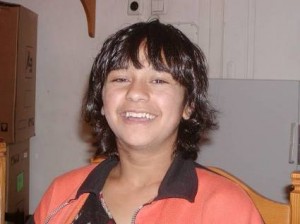 Many other Roma (gypsy) children lived there too, without toilet or running water, so the girls would come and get water from the Church to take home in bottles. Soon they were coming for Bible studies and teaching too.

The families were squatting illegally, so soon they were evicted and Vaska moved to a nearby Roma ghetto, but she never stopped coming to the Church.

When Vaska was little her mother accidentally burned her throat with hot milk so that she can still only whisper. Despite many attempts to take her to the doctor, her mum steadfastly refused to cooperate with Church people, who were therefore powerless to help her get medical treatment.

Now at 17 Vaska is forced to stay at home working as a maid for her brother’s family in the ghetto, so she can’t attend school. In fact she has received no official education in her life, so was delighted to join the Church’s literacy program, although it has to be said she still attends as much for the hot shower before than for the studying!

Vaska is one of those resilient youngsters who is trying to maintain standards in her life, which is not easy with no education or parental support.  She has avoided being sold into marriage as often happens in her community, and has kept away from the real dangers of prostitution and drugs, which is a considerable achievement in her situation.

Last year Vaska became a Christian and was baptized.  She attends church regularly, and if pressured to baby-sit at home she still comes, bringing the babies with her!

She has been shown love and care by many Christian people, and her life has now taken on a real meaning.

This is just one of the many lives changed by God working through Sofia Baptist Church.

Many other current programs help the elderly, homeless, and scores of children in orphanages.

All these programs will be consolidated and expanded with the completion of the new Social, Medical, and Training Centre.