A great time full of moments to remember indeed. God made it special for the children and for the team that travelled. But let me tell you all about it from the start. 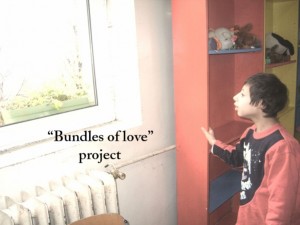 The preparation started as early, as the first days of November. We contacted all the institutions we were about to go to. After that we gave out to people from the church plastic bags with a name of a child and a list with things to fill the bags with. So people were able to fill a bag and write a card for a specific child to make its holiday special. In spite of the difficult situation Bulgaria is now economically, people gave gladly and generously filled all the bags, and gave furthermore so that we can buy food for the institutions. We received an extra donation and also bought shampoos and saups for each child. And as time went on we were able to collect all the bags.

Meanwhile we recorded the sound-mix for a puppet show telling the story of Jesus`s birth. The scenario was funny, there were Christian songs and exciting information and things to learn about Jesus’ birth. After that we rehearsed the show with the puppets for three weeks to make sure the puppets were performing well. All of the people that participated were volunteers from church, mainly from the youth. They put all their efforts in making the puppet show work and look proffessional.

Then in the middle of Decemberq in six days we were able to visit 12 homes for children. We travelled to different directions from Sofia. Here are some pictures from those visits.

11th December 2009 – The first day we went to the Nothern part of Central Bulgaria.

The first place we visited was in the village of Razliv. The children in the orphanage were happy to see us and spend time with the people from the team. And ecpecially to play games with some of the boys from the youth. 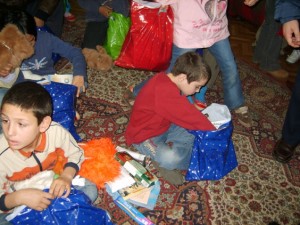 Razliv orphanage – children enjoying a visit from the “Bundles of love” team.

The second orphanage we visited was in the village of Roman. We have special connection with this institution as many of the children come to the summer camps we organize. It was like being among many friends and having fun time with children we know well. And they were very glad to see us too. They had even prapared a drama to show us, that told about God creating the man and how Jesus gave his life to save us. They had leaned it from a clip on u-tube. 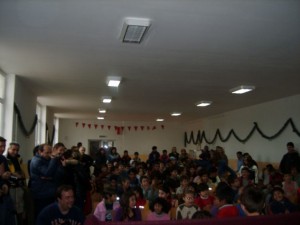 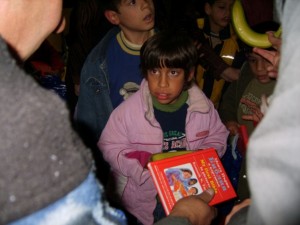 Orphan girl in the village of Roman

13th December 2009 – we showed the puppet show for the children at Sofia Baptist church on the Family evening service.

14th December 2009 – on that day we visited an institution in Sofia. We visited a school for disabled children. 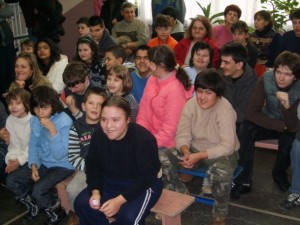 School in Sofia for diabled children

15th December 2009 – we travelled to the very South-Western corner of Bulgaria. We visited three homes for children. 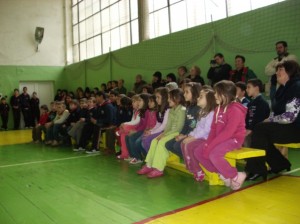 The first  one we visited was in the town of Dupnitsa. We went to a public school, that also has a class of children with physical and mental disabilities, who were glad to see us. During the puppet show other children from the school also joined us.

The second home for children we visited was in the village of Stob. We also gave the children new beautiful scarfs donated by a church in Romford, UK, wich they loved, ecpecially the girls. 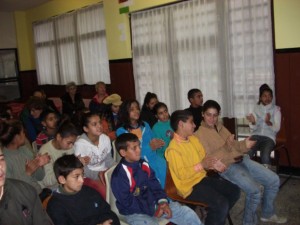 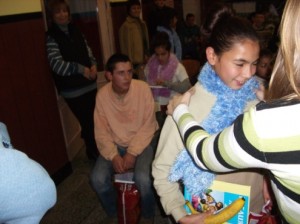 The last institution for neglected children we visited was in the town of Blagoevgrad . 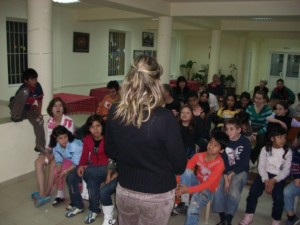 Children hearing the Christmas story and the good news

16th December 2009 – a trip to the village of Lesichovo was undertaken. This institution is 100 km to the east of Sofia and is a home for abandoned children ageing 3 to 6. It was a sad and a happy time for all. Most of those children were up for adoption, but it is sad to even think about the next stages for those, who for some reason will not find new parents soon. 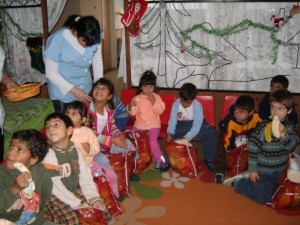 Abandoned children enjoying the Christmas presents and the fruits.

17th December 2009 – we travelled to North-Western part of Bulgaria. We visited three homes for neglected children in the town of Berkovitsa. We had a difficult time getting there trough the mountains because of the snow, and one of our vehicles needed a pair of chains at some point, but we made it safe and sound. And we were able to bring about wide happy smiles to the children`s faces. 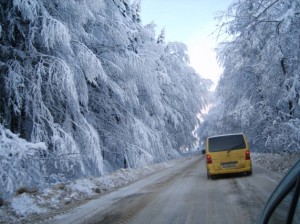 Travelling through the mountains

The first place we visited was an institution for physically and mentally disabled children. They made us feel very wellcome as they had prepared a special drama for us, too. 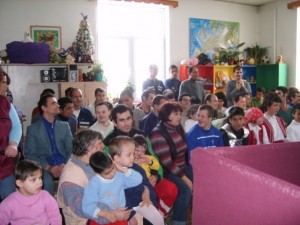 An institution for physically and mentally disabled children.

The second institution we visited was of an educational type where children live and go to school in the same complex of buildings. There were many children that were ill but inspite of that we had a wonderfull time with them. 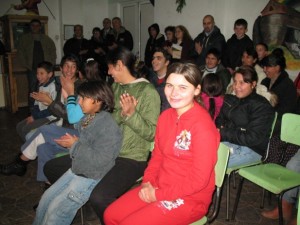 The third was the last place we visited for the day. We have been working in the Berkvitsa homes for over 18 years now and were very encouraged to see that particular place starting to get better in many possitive ways.

18th December 2009 – The last trip day of this ‘marathon’  took us some 250 km to the North-East of Sofia. We went to the town of Gyliantsi. The Winter had decided to give us a hard time and on two occasions during our initial five hours` jorney through the snow we thought we won`t make it, but praise the Lord, eventually we did. And we were able to visit two anctious to see us homes.

We visited a school where the children from three villages had gathered to hear the good news of Christmas through the puppet show. After that we visited the local Baptist church where poor families had brought their children to hear about the birth of Jesus and the special season. 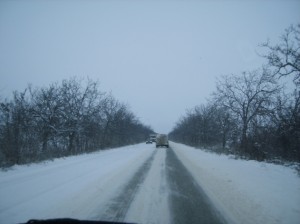 On the way back

At the end of our journey…

Moments like those are unforgetable and are inprinted in memory for a life time. This year our efforts were tested by hard work in preparation, very cold weather and little accidents during the trips,  but were blessed more than many other peaceful moments in life. And then, the smiles, the hugs, the gratefullness of the children make all of that totally worthwhile. 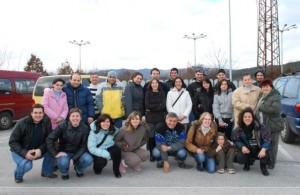 The “Bundles of Love” Team 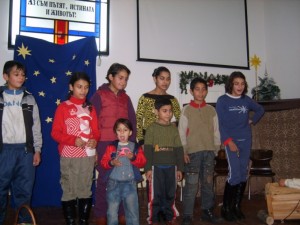 On 20th December we had an evening children service. We sang children’s songs and we had the children from the Sunday School of the Church introducing different Christmas plays.

The children from the literacy class also performed in their own Christmas play. They were really happy and enjoyed it. The gathering appreciated them quite a bit.

We started preparing for that play two months earlier and the children – part of the literacy class – gave their best in it. It is somewhat difficult when you have children as little as 5 and as old as 17 working together in a play, and when noone is terribly good in reading yet, it makes it even more difficult. But, there was the excitement to come in front of the church and introduce the play, and when the time came they did very well indeed. 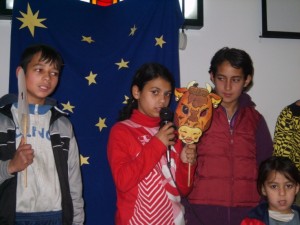 To make the time even more special we prepared and gave the children from the Literacy class presents for Christmas, we knew those were probably going to be  the only presents they got this year.