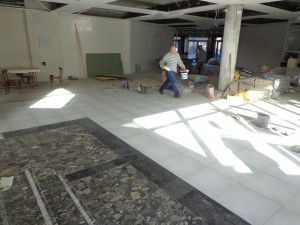 On this picture you can see Tenio (a member of our church) putting the tiles on the floor. At present he is doing most of the work at the church – painting, gluing tiles, plastering, bricklaying… He and his family are new members in our church; I believe they joined in the last 3 years. He is a skilled builder and we are blessed to have him working on the new center. His wife is also working here and you will see later on the pictures some of her work. 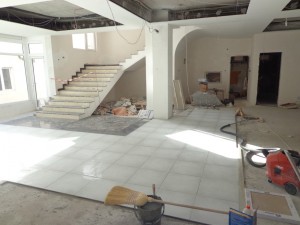 Here you can see that we have started laying tiles in the hallway on the path that is leading to the second floor where the main auditorium is. There is also another staircase and an elevator that people renting offices on the fifth and sixth floors will be using. On the right side of the picture (unfortunately you can not see it) is the medical center with 3 doctors offices.

main auditorium, balcony, library and room for mothers with babies

On the next two pictures you can see the stairs leading to the second floor where we will have our services. The steps are made of marble which is quite beautiful and unique. 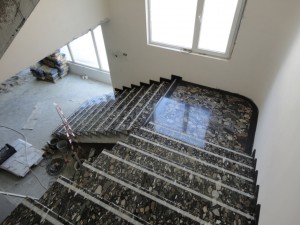 To make the whole picture complete, when people go to church services on Sundays and when walking up the steps they can read scriptures written on some of the steps – “I am the resurrection and the life. The one who believes in me will live, even though they die”, and 4 more scriptures where Jesus says “I am…” in the Gospel of John.

On this picture below you can see the glass doors that were installed about a month ago. This is a special requirement from the fire department. In case of fire or smoke, the doors will prevent the spreading of the fire. On the other side it will help us keep the hallways and the offices warmer in the winter and cooler in the summer because we won’t need to heat/cool the stairs. 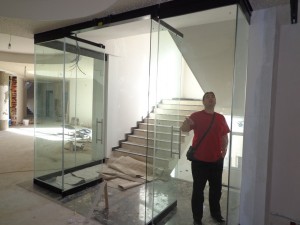 This is the current look of the main auditorium. It took us several months this year to install all this metal boards and rails. They will be used to hold the special net which will make a perfect acoustic in the hall. The wires that can be seen are for the lighting. 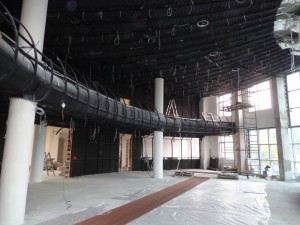 The hall the including the space on the balcony is designed for about 450 people almost 3 times more than the hall and balcony in the church now. 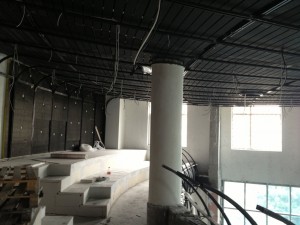 The fourth floor is AMAZING! The walls are still not finished in all colours but there are paintings, actually a whole city is displayed and can be seen on the walls of the hallway. Ralica (on the picture on the left) is Tenio’s wife. She is a great worker too. She is drawing the pictures on the walls in this photo, but she also helped Tenio in every other work he dose. 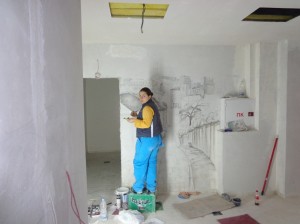 This is the hallway of the fourth floor. You can see the beautiful walls and the unique pavement. There are 100 small stones in a square meter. It took several months until Tenio finished the floor. The problem is that we can not find good worker like him and he has to work on different places in the building so it has taken him a while to finish this pavement. 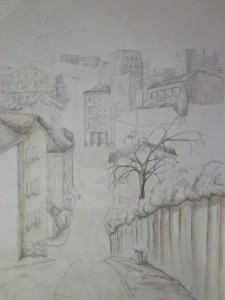 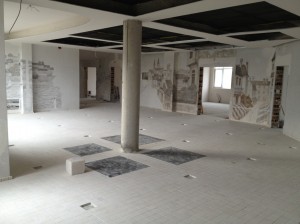 On these pictures as you can see we are almost done with this floor. We are only waiting for the doors and for the carpets to be fitted. These two pictures from the sixth floor are also very recent. There is only one office that still needs to be painted here. On the fifth floor there are more offices in need of paint, but there is a volunteer from our church – Petar who comes every Wednesday to work and he does not want to be paid for his work at all. He has been coming voluntarily doing different jobs for over a year now. 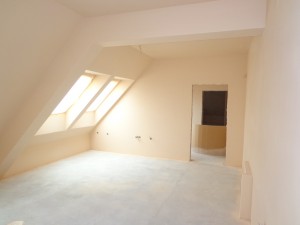 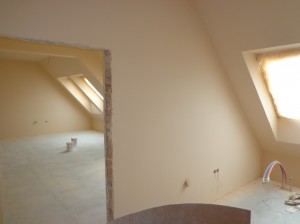 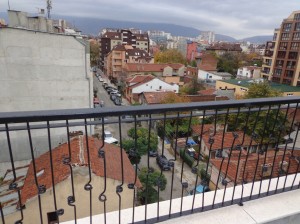 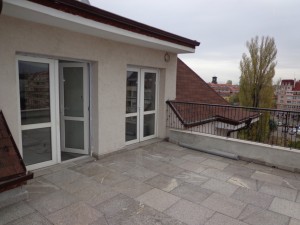 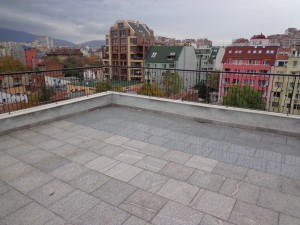 On the bottom picture you can see the stairs that people who rent the offices in the business center will be using. They go all the way from the first to the last floor. The stairs that we will use end at the fourth floor. 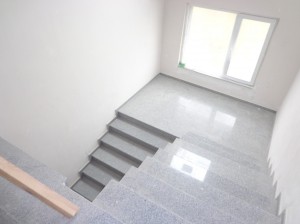 This is building B where we will open doors every day for homeless and poor people from the region. They will have access to warm food, to a bathroom, and to a place where they can sit for an hour and talk with other people so that they can fell being accepted. The idea is the business center (fifth and sixth floor) to raise money for other ministries like the literacy classes, medical center, the kitchen and all the needs of the building (electricity, water, etc.). 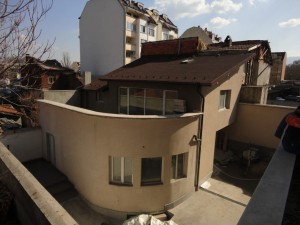