Fantastic! What an experience! 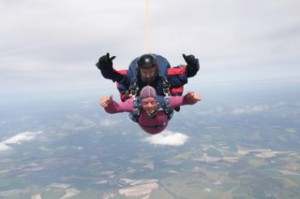 Skydiving is definitely for me! But it wasn’t all plain sailing…

The accident rate for first jumps is 1 in 370

Great! Just the reassurance I needed on my first jump! And what if I am number 371!

The instructor pointed out that most of the accidents happen to student jumpers doing their first solo jumps, and furthermore that while this might be my first jump, it wasn’t my instructor’s first!

His view was that I had probably already run greater statistical risks simply driving to the airfield that morning on the dangerous country roads!

Next problem – I have trained to fly gliders solo so know a little about losing control in air turbulence. It seemed t me that there was a danger of ‘getting in a spin’ when jumping out of the side of an aeroplane into its turbulence with no visible means of altitude control.

They had thought of this to. It seems that on leaving the plane the instructor immediately deploys a small parachute called a ‘drogue’ which keeps us falling the right way up AND slows us down from 160 to 140 miles per hour.

Apparently this ‘reduced’ speed is a great help in allowing one’s accompanying free-falling photographer to keep up, and gives an extra few seconds of free-falling ‘enjoyment’ before the fast-approaching ground makes it wise to open a parachute!

Then I recalled another comforting fact. I had been offered insurance for my jump at a FIXED PRICE of £20. There is no way the insurance industry would do that unless there was virtually no risk.

After several hours and many cups of coffee, Janet and I realised that the wind was not going to drop below the 20mph safe limit, so we went home.

Could I really entrust my life to a complete stranger in this way? Well, two weeks later the weather seemed stable so I re-booked and went off to the airfield with the one person I have already entrusted my life to… my wife Janet.

We soon met Phil, my instructor, who was friendly, knowledgeable, experienced and, er, taller and heavier even than me! He assured me that the parachute could cope with a combined load of well over 25 stone…

Phil introduced us to our diminutive cameraman Steve. There was some discussion about whether small Steve would be able to fall as fast as us two ‘biggies’ but he wasn’t using a drogue, so was confident he could. And with 1,800 jumps to his name, he should know!

Steve had an amazinghelmet with a video camera and a lare Canon stills camera bolted to the top and the side. He operated the latter by means of a vacuum pipe in his mouth, and could see the video image on a small monitor in front of one eye.

Imagine operating all this equipment while falling at 140 miles per hour, circling around your target, and trying to remember your all-important altimeter! I (incorrectly) surmised he would never mange it, and that I had just wasted £99 for shots of the sky.

Steve’s only means of control was the position of his arms, assisted by fabric webs attached to the sides of his jumpsuit, making him look somewhat like a bat – although as it turns out, he flew rather better than a bat!

Soon we were climbing into the 14-seater plane – from which all the seats had been removed, so we sat on the floor packed together between each others’ legs.

Them at 5,000 feet, the door was opened and three intrepid young parachutists smiled, waved a cheery ‘goodbye’, stepped backwards into oblivion, and were gone.

It was then that a tiny twinge of panic made me realise the enormity of what I had gotten into! 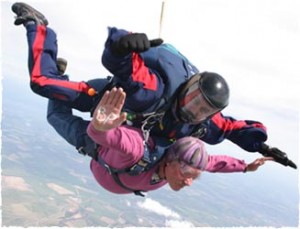 We climbed to 12,000 feet and Phil started issuing friendly but firm instructions. “Please do up your helmet”, “Put on your goggles”, “Wiggle forwards”.

Strapped firmly together, we shuffled towards the door. I stuck my feet out and tucked them under the plan. Phil pushed me dangerously close to the edge. Cameraman Steve backed out and hung outside the door to video our exit.

The wind outside an aeroplane was considerable and it was difficult to hear anything, but Steve and Phil had played this game before…

With a nod and a shout of “NOW!” Steve was gone, and we followed a split second later.

The exhilaration of falling into space was tremendous. I remember seeing the plane flying away from us overhead as we rolled over, falling freely.

Then came my relief as we had stablised out free-fall the right way up, i.e. facing the ground!

Next, to my great surprise, there was Steve a few metres in front of my nose… how did he get there?

I gave a cheery wave for the camera, and then remembered that I had written BP on one hand, and T on the other. BPT would not be visible if I didn’t put my hands together, which is somewhat against the rules as it reduces stability.

At 140 miles an hour in free-fall, Phil didn’t seem to be in a position to object, so I risked it.

Cameraman Steve disappeared, reappeared below and took more shots, disappeared again, and then Phil opened the parachute. We slowed dramatically – even though the parachute takes about 1,000 feet to open.

At 5,000 feet Phil remarked that at this height he would have deployed the emergency chute if necessary – although the ground looked a bit close for this to me!

Being suspended from behind with arms and legs dangling over 5,000 feet of nothing is an extraordinary feeling. Like a kitten held by the scruff of the neck hovering helplessly in space.

Phil kindly let me help him with a few turns by pulling on the parachute controls, but as the ground approached he asked me to let go, saying “I have control”. This is a protocol I recognised from my gliding days which ensures one pilot doesn’t relinquish control without the other realising it!

A perfect landing after five minutes, and it was all over, except for congratulations, thanks, more photos, carrying the parachute and drogue back to the packing shed, and collecting a certificate!

Once the adrenaline had subsided (my hands were trembling from exhilaration on landing) I had time to consider how I felt.

A sense of achievement? Certainly.

A sense of satisfaction? Well, no, actually, Phil had done all the work – I had just been the passenger.

What does give me a very great sense of satisfaction is having encouraged eighty wonderful supporters to donate over £8,500 (including gift aid) towards construction of a Centre in Bulgaria to greatly help large numbers of other humans who could never even dream of sky-diving.

SO THANK YOU FOR CONTRIBUTING… YOU MADE IT WORTHWHILE!